I now have a new found hatred of hills, this time down hills.

The first and main reason for hating down hills is they are dangerous.

As we were 1 mile away from lunch, in Frankfurt Öder, we came across 50% down hill sign which descended into the town.

At the beginning this seemed like fun half way down the hill I saw that someone at the side of the road and their saddle was on the floor and this I thought was the extent of the troubles.

It wasn't until we got to McDonalds in the town that I found out what had actually happened.

One of the tteam had come off his bike and hit the barrier and at this point it was suspected that he had a broken collar bone.

A few of the guys waited with him whilst the ambulance arrived, and then cycled into town with a bike on their shoulders.

I've since seen him and he has indeed got a broken collarbone, presently strapped up, later this evening he is travelling back to Szczecin to have surgery on his shoulder.

After lunch we headed out of Frankfurt and came to a hill, of the up variety.

I did alright and managed to keep the pace going, I could see the top insight and thought "I'm getting the hang of this".

At the top there was a right turn and I found this was not actually the top of the hill after all and by this time I was burnt out.

By the time I got to the real summit of this the rest were about 200 metres ahead. I carried on and tried to catch up.

I need to learn the technique of riding up hills I just haven't had enough experience yet, but I will learn and then I can stop fearing hills, except for their danger.

Apart from this the day was great and I really enjoyed the morning and yet again the scenery was stunning. 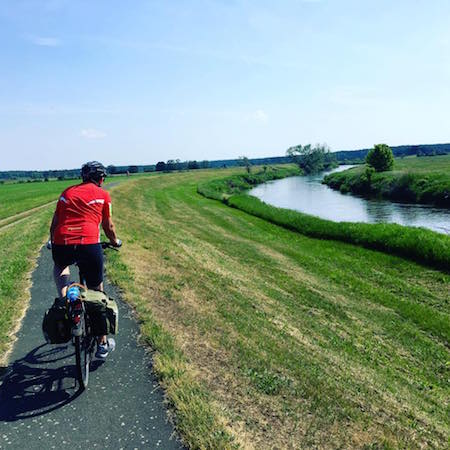